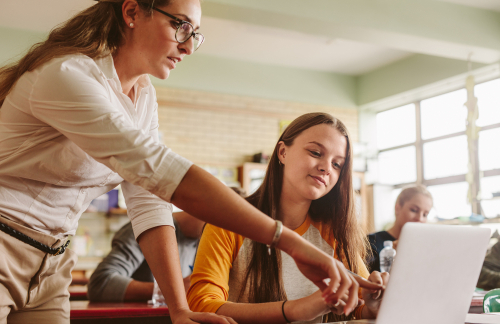 There are many reasons that many educators and parents support bilingual educational models. While learning more than one language provides social benefits for children in later life, it also bears other, more immediate gifts. The cognitive and neurobiological improvements are useful in both classical educational pursuits and in the acquisition of essential life skills, such as time management, social fluency, and even the enhancement of empathy. Essentially, the brain is like a muscle, even though it is almost entirely composed of fat and water. The more exercise one gives it, the stronger and more robust the Function of Mind becomes.

While the impacts may seem marginal when only considering standardized testing scores, measures of academic performance encompass other criteria beyond the ability to perform well at test time. The school experience encompasses several different types of education. Beyond the acknowledged lesson plans and homework of a subject, one must also consider the realms of sociality and practical skill sets. Students who received a bilingual education exhibit greater satisfaction and social stability as well as a more enhanced set of life skills than students who speak only one language. There are several reasons for this, all of which are deeply interconnected within human neurobiology.

Learning two or more languages strengthens executive function in the human brain. According to an article published by National Public Radio (NPR), individuals who acquire more than one language typically outperform those who speak only a single tongue in matters that require focused attention. In addition to greater attention to the task at hand, the challenges of switching between languages impact another facet of the human executive function. They can more easily switch from one task to another. This is attributed to the need to switch from one language to another in order to learn meaning and form syntactical structures. Brain scans of multilingual and monolingual adolescents showed a clear neurological difference in brain structure.

The Sage Journal of Teacher Education published an article by McAllister of Northern Arizona University and Irvine of Emory in which they note a critical feature of the enhanced student brain training and engaged classroom dynamics associated with bilingual pedagogical models—empathy. In short, teachers interviewed for the study indicated that the suite of behavioral, cognitive, and affective traits required for a more profound connection with students were all called into action during bilingual instruction. Not only did this serve to enhance student performance, but it touches upon another critical feature of human learning. The imitative capacity of children is well-known but often underutilized in traditional, monolingual classrooms. However, because the pedagogies involved cultural immersion experiences, cross-cultural engagement, and exercises that were inclusive of minority experiences, teachers noted a higher and more evolved suite of empathetic behavioral traits in their students.

While the push for English-Only education marked several decades of school children who hailed from minority backgrounds, it seems that research has finally unmasked it for the damaging myopia it is. While it may only offer the impact of missed growth opportunity to students whose native language is English, the damage it does to the family dynamics of non-English-speaking students is manifest. As English-only education progressed for these individuals, hearth tongues faded and were lost. Along with the words, relationships were disappearing, leaving grandparents and parents marooned from their children. However, with bilingual pedagogies, these relationships are preserved, providing children with much-needed emotional support during their school years and beyond.

While it must not be treated as an isolated ‘cure,’ a bilingual education may offer insight into the fight against Alzheimer’s disease and other forms of dementia. Here, the interconnected benefits of such a pedagogical structure become clear—while enhanced social intelligence, empathy, and familial support all provide a safety net of sorts in the event that an individual develops one such disease, what can it tell us about averting or delaying the onset? The answer may be in the neuroplasticity that students who engage in these models are afforded. Resilience, focus, and an increase in recursive thought all indicate an active brain. If students maintain the behaviors and brain exercises through adult life, it’s entirely likely that they may avoid or delay the dreaded ends often taken for granted by many.

Bilingual education provides a host of benefits. Not merely limited to student scholastic achievement, these benefits can impact home and community life during and long after those students matriculate. It offers enhanced empathy, greater neuroplasticity, stronger familial and community networks, and a host of skills that will stand young people in good stead as they move out into the world.