To Test or Not to Test: Questions on Standardized Testing

To Test or Not to Test: Questions on Standardized Testing

Since No Child Left Behind in 2001, standardized testing has become increasingly excessive in our school system. The high stakes and high costs have parents and educators wondering if we’re focused too much on testing and not enough on teaching. In 2011, a cheating scandal was exposed involving 178 Atlanta Public Schools’ teachers and principals. While admittedly one of the largest, it was not the first nor the last in response to the increasing pressure placed on schools by standardized tests. So… to test, or not to test? That is the question.

[Tweet “Since No Child Left Behind in 2001, standardized testing has become increasingly excessive in our school system.”]

The High Stakes of Standardized Testing:

The High Cost of Standardized Testing:

Founded in 1926, the SAT is a measure of college readiness that serves as one of the leading considerations for a student’s admission to college. As nation-wide SAT scores continue to decline, research calls into question the efficacy of high-stakes testing.

*In these years the SAT was on a 1600 point scale. We scaled them up to the current 2400 point scale for comparison.

The Racial Bias of the SAT

Research shows that the SAT might unfairly put minority students at a disadvantage.

Every year on the SAT there are a group of experimental questions that don’t get scored. Instead, they are analyzed to determine if they will be included in the next year’s questions:

SAT Averages and Percentages of College-Bound Seniors by Race/Ethnicity, 2013:

The Economic Bias of the SAT

There is a strong correlation between family income and SAT scores. Possible causes:

The Gender Bias of the SAT

High school GPA is usually the best predictor of college performance. Women have a higher GPA in high school than men, and they also have a higher college graduation rate. However, women score lower than men on the SAT:

The Movement from Standard to Optional

Over 800 four-year colleges and universities have instituted “test score optional” policies in response to the research on standardized tests.

There is no significant difference of college GPAs and graduation rates between those that submit standardized test scores and those that choose not to:

Currently, 571 organizations and 18,955 individuals have signed a National Resolution on High-Stakes Testing. They are calling on policymakers to reduce testing mandates and reexamine public school accountability in order to improve the quality of learning in the classroom and reduce the negative effects on students, teachers, and campuses.

It’s time to take a time out from high-stakes testing! 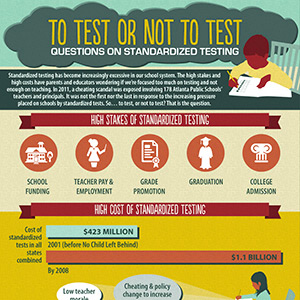